This module is on perspective and Still Life. If you’ve been following along this study period, you’ll know I am crap at realistic drawing and even worse at seeing in 3D. So I tend to not draw things in perspective. If I’m completely frank with you – it’s not that I don’t want but that I don’t know how. Perspective scares the hell out of me.

There are various types of perspective. Linear, atmospheric and something else. Anyway, I started by using inks (yes, Indian ink!) to create a Variable Scale perspective drawing from my imagination. I loved my first attempt but it was flawed. Subsequent attempts were absolute crap but the fifth attempt was just going to have to do.

Next up was a single point perspective. Of course, they explain it and I still don’t get what that is until I see this extraordinary video…

I chose an image from the clip above – a still from 2001: A Space Odyssey and decided to recreate it. We weren’t allowed to use rulers so I traced mine from the original and then made subtle changes. Charcoal was not a kind medium for this piece but eventually I finished. 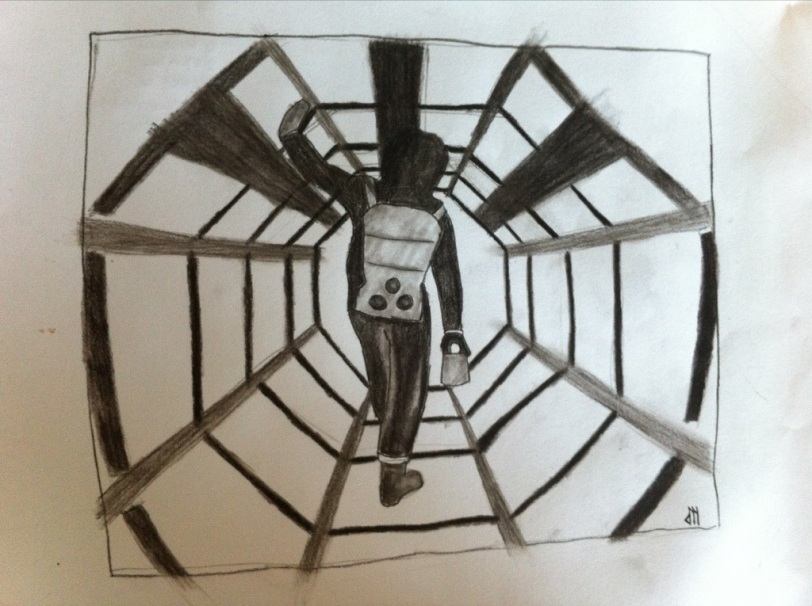 Halfway through my charcoal catastrophe, I took a food break and ate, staring at the bottle of Indian ink. The brush. The syringe. The egg cups. The jar of water. I made three more attempts to redraw my picture. I liked the 8th and stopped. So it shall be Attempt Number 8 that I submit. 🙂 Nope, I make one more attempt and agree I should go back to number 8. This is tricky!!!!

8th attempt of variable perspective – Indian Ink. I submitted this one.

Next up is two-point perspective. Ok, so this is where you see two sides of something. I think. Anyway, I do a quick sketch of this one… I think it’s correct but I’m not entirely sure. And let’s face it, it’s not easy to make a table look interesting!

Ok, so now we’re onto Drapery. We need to use charcoal to draw fabric draped. So I grab a tablecloth and … well, drape it so it sits on a stool. And then I grab the camera, snap a photo and print it out. And then using water soluble charcoal sticks, I create a medium ground (which is a background that will show off both black and white apparently) and using paintbrushes and water, I try to make it even. Then I use willow charcoal to draw what I see. I quite liked this piece and felt it was pretty realistic. Willow charcoal is very messy but much easier to work with than other charcoals, I feel! 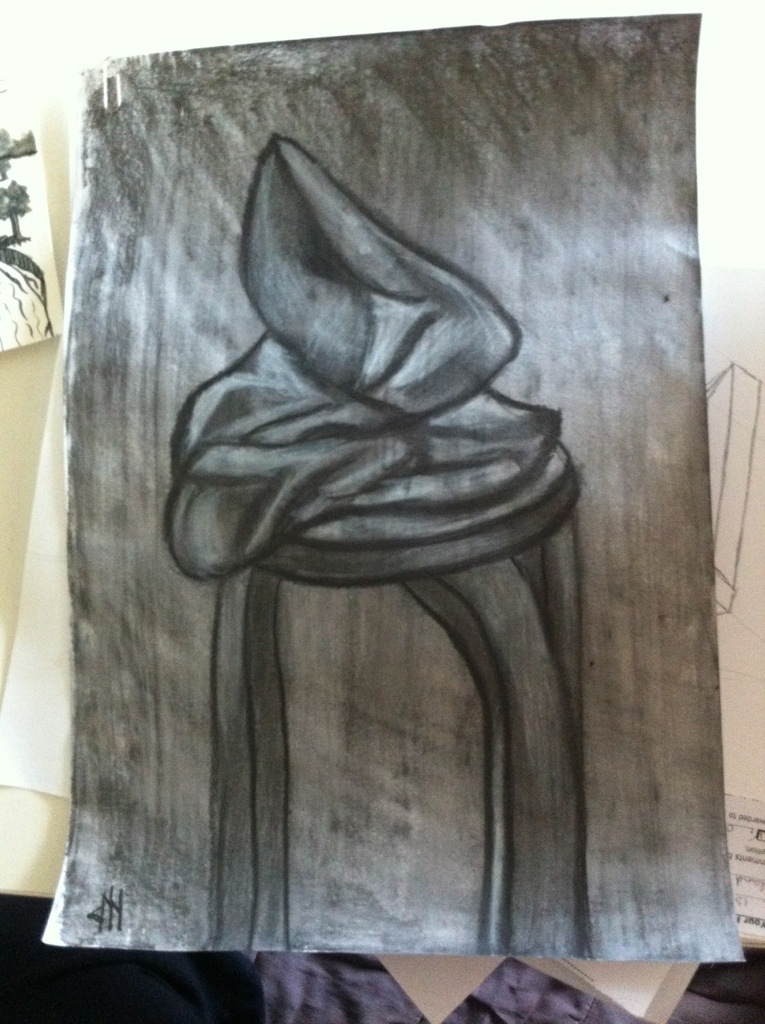 And from drapery we move to still life. Ugh. Seriously? Pretty please, can I have a pass to NOT do still life? So far this module blows, but I have to admit, I’m learning heaps! And drawing so much more than I would if I wasn’t doing this unit. So that’s good I guess!

So STILL LIFE. I need to create a five part still life. My item shall be a dog toy bone (does this sound familiar to those who read my painting posts???). The five parts are

I started with a rough picture of what it looks like. Using a previously completed water soluble medium ground, I used both willow and charcoal pencil and then highlighted using white charcoal contes. Frankly, it sucks.

To do this one, I thought about the essence of what I was drawing, which really was just a bone shape. Bones are buried in the soil, and live in the soil with snails. Dogs love bone and love digging in the soil to find them, often finding snails instead. So this pictorial became an illustration of a bone as a snail. And a snail as a bone, which starts with a little bit of love but by the time the largest bones are found becomes a lot of love. (Yes there’s a lot of deliberate symbolism in this piece). 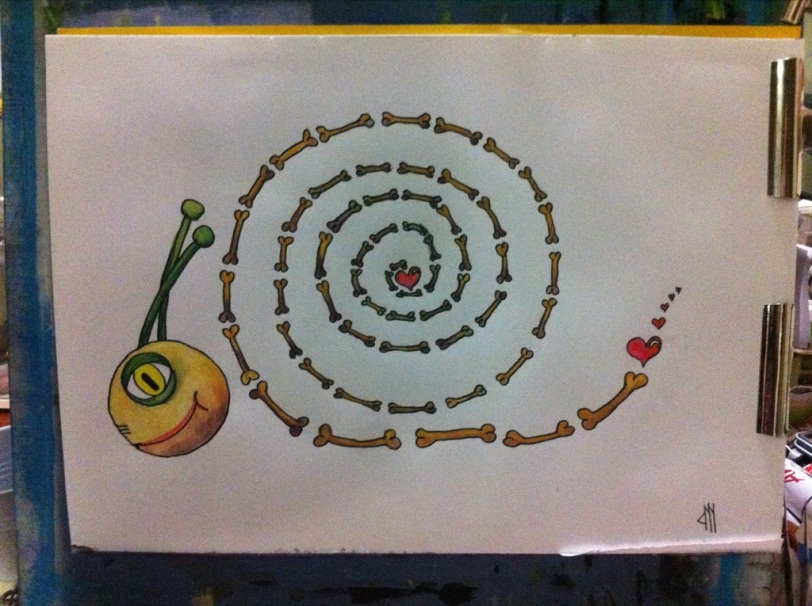 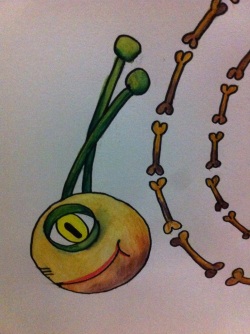 The logo or icon was tricky. I originally started with an idea of a bone shape as negative space onto positive space but it didn’t work as I’d hoped and frankly, it just sucked. So I thought about what other things look like the shape of a bone. A bow tie!

So next was creating a collage about a dog bone toy. I chopped up clothing and rugs and all sorts of things to create this highly textured piece. I also used digital scrapbooking papers which I printed out and glued onto card to add contrast.

Components of the still life collage

I have to admit that I think it’s pretty funny that my favourite piece, the piece that I liked the most, I forgot to photograph before sending off! It was of the bone wrapped in a tshirt. There wasn’t anything special about it, but I think I have a knack for drapery and fabric when using willow charcoal.

Anyway, all of these pieces were submitted except for the Space Odyssey one (I could leave one out) so there goes another assignment!